Carleton-in-Craven is a small village in North Yorkshire, England. It’s situated about two miles from the market town of Skipton.

With an approximate population of a thousand (and growing), it contains services such as a primary school, a Church, a Post Office, pub, social club, garage, playgroup and a children’s nursery.

The local Village Archive’s ‘History Research Group’ are currently investigating all aspects of the history of Carleton. They can be contacted by email carletonhistory@gmail.com.

There is a plaque on the wall in the courtyard, it reads:

The Carleton Hospital & Spences Charity
This AlmsHouse and an endowment
for the outpensioners of Carleton & Lothersdale,
was founded in the year 1698 by Ferrand Spence
of London & provided with a further generous
endowment by Agnes Vardill Niven of Carleton
in the year 1872
This tablet prepetuates the memory of
Ferrand Spence
the founder of the charity
Anna Jane Niven ans Agnes Vardill the mother
& maternal grandmother of the benefactress
Agnes Vardill Niven
and the restoration of the Alms house by
Jessie Blossom Coulthurst
of Gargrave House Gargrave formerly of
Ravenshaw Carleton & the Coulthurst trust
in the year 1955
To the glory of God

In 1805 Robert Wilson was one of three Beacon Guards sent to guard Pinhaw Moor above Carleton, the guards were set up to give a warning as part of the national system agianst invasion. It was thought that there could have been an invasion from the English coast, they kept a watch out in the direction of Colne as Napoleon Buonaparte was making preperations to invade the country. The men were housed in a small hut on pinhaw, it was a very bitter winter, the snow was so severe it held the men in the hut for quite a while, their food supplies were running very low.

Robert Wilson, thought to be the chief Beacon Guard, was going to walk in the snow storm to Moor side farm to get more supplies, the other men didn’t want him to attempt the journey as the snow was very bad, but he insisted and set off. He never returned, when the snow storms eased off the two men made their way down to the village to get some men to help search for Robert Wilson. He was found about four hundred yards from the small hut, sadly Robert had died. A stone was placed where he died, it is thought it is also where he was burried, the inscription reads: Hear was found dead The body of Robert Wilson one of the Beacon Gards who Died Jan 29 1805 Aged 59 years

A bundle of love letters in envelopes were discovered by chance in a barn wall at Monor house farm in Carleton, it reveals two lives. Written from 1889 to 1893 by Lizzie Sutcliffe of Blackburn to Tom Anderson, a farmer in Carleton, they tell a classic tale of love which was one sided, intimate times during their meetings during the holidays and betrayal where Thomas asked his brother to write to Lizzie informing her that Thomas had died, then she found out later that he was still alive.

Directed and produced by Patrick Hargreaves, he gave a talk in the Village Hall in Carleton in Craven on the 26 th March 2011.

The Yorkshire Post wrote an article on the letters.

There is a DVD available of the film. Please get in touch if you are interested in having a copy.

The insciption on the stone reads:

This stone can be found on the way out of Carleton over the moor towards Colne, along Carleton Lane, (mill hill to locals) up past the forest, and half way between the end of the forest and the pull in at the top of the moor, “the log” (as known to locals), the stone is on the left hand side of the road in the grass verge. Two local men remember the bombs being dropped,

It was about six in the evening and Fred remembers hearing the bombs and everyone ran outside to see what was happening, the street wardens had to try to get everyone to go back inside. The bombs had destroyed the road, and made crators on the moor.

Clifford remembers he was out with his friend Donald collecting wood in a wheel barrow. They saw a German plane following the railway line from skipton, the plane then turned toward Carleton and went up to the moor where it dropped its load of bombs. they hid under the bushes at the side of the road. They went back into the village where the wardens were busy trying to get everyone inside, being young lads and wanted to see what had happened, the wardens told them not to go to the moors.

Here are a selection of historical photos of Carleton and its inhabitants. 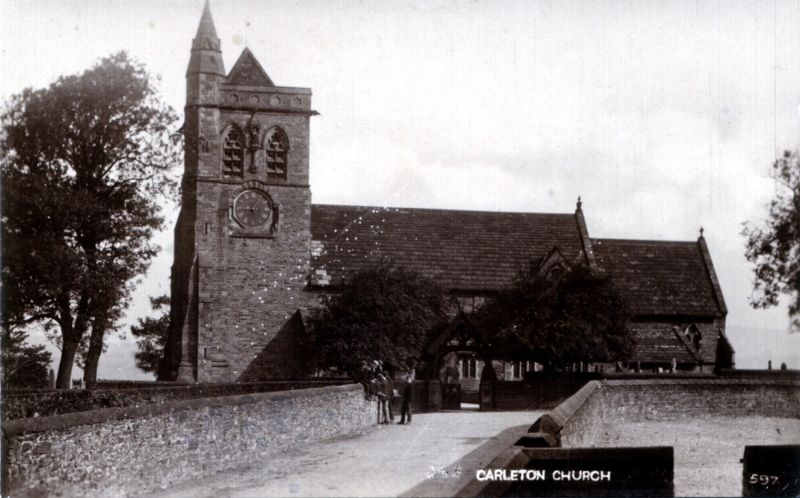 We use cookies on our website to give you the most relevant experience by remembering your preferences and repeat visits. By clicking “Accept All”, you consent to the use of ALL the cookies. However, you may visit "Cookie Settings" to provide a controlled consent.
Cookie SettingsReject AllAccept All
Manage consent

This website uses cookies to improve your experience while you navigate through the website. Out of these, the cookies that are categorized as necessary are stored on your browser as they are essential for the working of basic functionalities of the website. We also use third-party cookies that help us analyze and understand how you use this website. These cookies will be stored in your browser only with your consent. You also have the option to opt-out of these cookies. But opting out of some of these cookies may affect your browsing experience.
Necessary Always Enabled
Necessary cookies are absolutely essential for the website to function properly. These cookies ensure basic functionalities and security features of the website, anonymously.
Analytics
Analytical cookies are used to understand how visitors interact with the website. These cookies help provide information on metrics the number of visitors, bounce rate, traffic source, etc.
Others
Other uncategorized cookies are those that are being analyzed and have not been classified into a category as yet.
Advertisement
Advertising cookies are used to provide visitors with relevant ads and marketing campaigns. These cookies track visitors across websites and collection information to provide customised ads.
SAVE & ACCEPT
Powered by